We always love to hear stories from Zoggers who have lived out the ZogSports mission, like Ann Marie’s…

I am so fortunate to benefit from ZogSports’ vision for a better future.

I joined Hoboken’s ZogSports a year after losing my fiancé to a brain aneurism almost ten years ago. I didn’t know at that time if I could ever be happy again. Everyone I knew was either getting married or married with kids, except me. Widowed at 30, I felt like my old life didn’t fit me anymore. I knew I needed to meet people my age but it is so hard to make friends when you are in your 30’s. I didn’t think I had any particularly interesting hobbies, and was never the athletic type, so I was intimidated easily by sports. Lucky for me to have found ZogSports which offered a variety of organized sports that catered to all skill levels (including the two I joined: kickball and dodgeball). These weekly games kept me out of the house and for lack of better words, saved my life.

It was during my first season as a Zogger where my now husband said he noticed me. We were out celebrating our respective games and exchanged a quick introduction. He told me later that he always looked for me after the games to see if we could meet up again. Four seasons later, the timing seemed right on both our ends and he asked me out. He seemed to know long before I did that we would end up together. Seven years later, We are happily married with our third child on the way this January.

I will always be forever grateful for ZogSports. It changed the trajectory of my life and allowed me to have a happy ending after all.

We couldn’t be happier to have played the role in your life that we did, Ann Marie!  Congratulations to you and your family.

What is your ZogSports Highlight?

“I started playing Zog volleyball in Hoboken during the Fall season of 2013, Debra and I had been dating for about 9 months. It is likely that watching me play volleyball came a distant 3rd to exploring some of Hoboken’s fine restaurants and getting to see her boyfriend, but Debra dutifully attended many Zog volleyball games. I feel safe in saying that she was the #1 Zog fan. She learned all of my teammates’ names so she could properly cheer for them and learned the volleyball vernacular. Throughout the next four seasons, Debra resumed her status as #1 fan by stepping up her cheer “prop” game. It started out with the Volley Llama poster. She took her creativity to a new level with the Cream of Wheat noise makers. Lastly, but not least, she brought pom-poms for last season’s playoffs. You could say Zog was a big part of our relationship…

So it should come as no surprise that the day I had chosen to propose (Veteran’s Day, Nov. 11th) I also had a volleyball game scheduled in Hoboken. Now I know that Debra is very understanding but I certainly didn’t want to push my luck… I e-mailed my team and told them I couldn’t make it (for only the 2nd time in 2+ years of Zog volleyball). Of course things don’t always go as planned… Our captain e-mailed back and said we only had 4 players coming and 1 of them was limping quite badly. It was the last game of the regular season and we needed a win or 2 to make the playoffs. I told them I would see what I could do…

Nov. 11th arrived and I had everything I needed (parental permission, a shiny ring and the courage to go through with the biggest decision of my life). I’ll spare you the lengthy details but we spent the day together and I made a concerted effort to keep Debra on her toes. Every detour we took she wondered if there was another surprise waiting or if it was just another decoy. We finally made our way onto the pier in Hoboken and I got down on my knee and asked her to marry me. It was 7:45 PM, we were newly engaged and she says to me “Wait, do you really have a volleyball game tonight?!”. It might not be the most romantic thing to do after you get engaged, but the game was at 8 and we hurried across town to the Boys and Girls Club. The first people to hear that we were engaged were my Zog teammates. One of my best friends is also my Zog teammate… two of my Jersey City teammates were on the opposing team that night… Jen the ref has known us for 2+ years and watched our relationship grow.. and of course my Hoboken team is full of new friends. It might sound weird but Debra and I both thought it was very “us” that the 1st people to know about our engagement were our Zog friends. We won the match 2-1 and clinched our playoff spot. The wedding is set for September 24th of this year. It was a great outcome all around.”

Did you make the game winning catch?
Did you get the last cup in beer pong?
Did you meet the love of your life?

We want to hear about it!

Send your ZogSports highlight with photos of you and/or your team to Highlights@ZogSports.com.

Didn’t Know You Before

We Make Them Look Good

All About The Glory 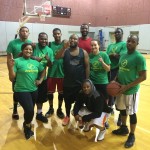