Jon Michael Kondrath can be found either playing, refereeing or capturing photos during the ZogSportsLA season. Now he gives Zoggers a glimpse into his life as an ultimate Zogger:

As a youngster in middle school and high school, I always loved playing sports and taking photos. I did both as hobbies and for fun; I didn’t like playing on varsity because it was too competitive and my photos went as far as yearbooks and school papers. After high school, I expected my sporting days were over and I fell out of photography for a time.

Over the years, I’ve met many great people and good friends through social sports. I’ve played in different leagues and different sports. Some were great for a while and then fell apart, others didn’t feel like the right fit, and some sports I just wasn’t that into the league.

As one of the leagues I was previously in was slowly spiraling downward, I was introduced to Zog in its second season in LA. That season was a trial period, test out this new kid in town and see what it’s made of. I knew what a good social league could be and should be, so I had high expectations.

Although some of my teammates were skeptical of the league, I immediately fell in love with it. New people gathering for sports and for social interaction afterwards, a league that cares about its players and the greater community, and something I hadn’t seen before – photos posted of us playing. I’m used to taking photos for USC and posting those, because they are a big school with athletes who have dedicated their lives to a sport. But, here we are, social sports enthusiasts, with a chance of having a moment of glory captured and forever immortalized.

In my next season, I immediately immersed myself in the league. I joined all four of the sports offered in Los Angeles and became a ref for beach volleyball (because who wouldn’t want to spend more time out on the beach?). During the beach volleyball season, I would bring my camera gear with me on occasion because I would have it for the weekend due to some sporting event I was shooting. I didn’t know who the Zogsports photographer was or if they would show up to our games, so I figured I would take some photos and share them with my teammates and the friends I was making. After posting some on Facebook, the LA General Manager asked if he could post them on the Zog Facebook page. I have no shame in admitting I love to see my photos posted up by others and seen by as many people as possible.

Enter season three with Zog, and I am now taking photos at as many of the games as I can. Some weekends my gear isn’t available or I may be too busy to take photos, but otherwise my camera is out capturing moments of athleticism, victory, and camaraderie. Every weekend, I meet new people who come up to me to say they saw a photo I took of them. Sometimes the comment is about the funny face they are making and to “next time get a photo when I’m looking better.” Other times it’s pure excitement for snapping the lucky moment of a game-winning play. Most of the time it’s to say thank you because they enjoyed looking at the photos. (I have no shame in admitting I love the Facebook likes and the positive comments of perfectly captured action, as well. So keep them coming!)

The reason I love photography, and social sports, is the sharing. Sure I love being complimented on a great photo or a great play on the field. But more importantly, I play sports and take photos for the interaction. Playing sports in a league where people show up and then go home, or only interact with their own team to practice and play in the game, is not fun for me. In a similar fashion, photography would not be enjoyable if I just took the photos and then kept them to myself. It’s the people that make both so precious to me: the people I play with, the people I socialize with on and off the field, and the people that are sharing and enjoying the photos. I am happy to have found ZogSports and its community of players and staff and I am proud to be able to contribute to the growth of the league in Los Angeles.

Whether you’re camping out to hear your favorite band or waiting to buy the newest smart phone, it feels like you have to wait in a long line for EVERYTHING!  From NYC to LA, there are lines wrapped around movie theaters, malls, sneaker stores and even Chick-fil-A!  Since ZogSports loves to keep up with the latest trends, camping out has become a monthly activity for the GM of ZogSportsDC.  No, Kendra is not getting a new pair of kicks! This camp out one of a kind and happens rain or shine on the first of the month promptly at 3 am! Sounds crazy…but crazy is our middle name. It’s time to let you in on a little secret– We’re headed behind the scenes in DC!

Many DC Zoggers have the privilege of playing volleyball at the Lincoln Memorial Sand Courts, but little did you know that these volleyball courts are in extremely high demand. You’re about to learn what goes on in order to acquire this high value space for every month of our DC sand volleyball season. 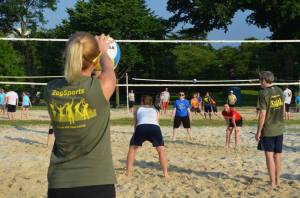 As the clock strikes 3:00 am, the DC crew wakes up and prepares to camp out. With charged phones and iPads, camping chairs and food, they set up shop. Some try to sleep until their alarm goes off at 6, while others engage in the friendly argument of, “Who was here first!?”

Of course, you must understand that when camped out, there is a list of unwritten rules that everyone must follow:

Now that you have a glimpse of what it’s like to stake out, anyone interested in joining ZogSportsDC on their next permit-procurement mission?

No? Alright… then just enjoy the leagues. 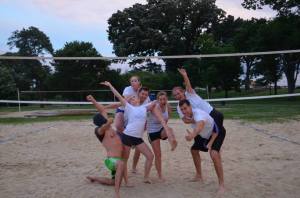 As many of you know, New Jersey has been going through a loss.  With the Nets moving to Brooklyn and not having a Garden State Football team, responsibility of pulling  Jersey through to the professional sport arena falls solely on the Devils and the Red Bulls. So with only two team to follow this coming year, ZogSportsNJ has some exciting news to share with our sisters and brethren in Jersey. While the Nets aren’t coming home anytime soon, we do have some equally exciting news for you Jersey Zoggers. This fall season, ZogSportsNJ is introducing a 23 league season!

Let’s go over the basics:

#HelloNewLeagues: With a brand new Bocce League in Hoboken, ZogSportsNJ is bringing more social to the field.  Thursday nights will now be filled with making new friends in Zog style. This old school game is bringing back the good ole days of calm and casual fun.

#HelloLongerSeason: Bring your ball- rolling skills to the lanes. Our co-ed bowling league in Union City is back! Socializing while you play and enjoying happy hour at the lanes is what Zog does best. This fall, ZogSportsNJ is offering a 10 game regular season in addition to the regular 6 game league. Wednesday nights in Union City will never be the same. 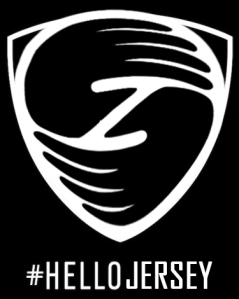 #HelloMontclair: We are happy to be back in Montclair this fall and want to formally welcome back our Dodgeball and Volleyball Leagues. With Volleyball on Mondays and Dodgeball on Tuesdays, your weeknights in Montclair will be filled with sports, friends and beer.

#HelloJerseyFootball: Even though the Jets and Giants play in Jersey, they are still known as New York teams. WTF, NFL? Thankfully, Zog is here to bring you some real New Jersey football this fall. While you watch your NFL team this fall, you can also play co-ed football with Jersey pride. Games will be held on Thursday and Sunday in Hoboken and Saturday in Montclair.

#HelloBergenCounty: Blue Law blues? Say no more! This fall season you can spend your Sunday with the Hackensack Soccer League. Weeknights will also be packed in Paramus with our Volleyball League.

Last but certainly not least:

#HelloFREEkickball: Yes, you heard it here first. ZogSportsNJ is offering the people of Montclair a preview of what is to come on in our kickball league this fall. Join us on Sunday, August 18th for a day of kicking and Zogging. Zoggers will then head on over to Just Jake’s to celebrate Kickball’s arrival in Montclair.

With a lot to look forward to this fall in the ZogSportsNJ world, we’re excited to say #HelloZoggers!  We’re back.